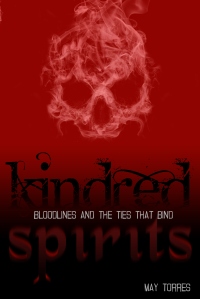 So I’ve published my second book and of course I’m little nervous about how it will be received.  I joke about how people will think I’m utterly mad after having read the book. I’m not too concerned with that because I think we’re all a little crazy :)! I do, however, worry about people being cross with me for what I’ve done to a sacred topic.  I believe people refer to this as, blasphemy.  *Dun dun dunnn… Thunder clap*

I’m not heavily into religion but I do respect everyone’s beliefs and have always had the opinion that no one is right and no one is wrong. Is blasphemy still a big deal? I’m not being sarcastic or careless when I ask. I’m genuinely curious. As I’ve stated, I’m not a very religious person so I don’t know.  So, tell me, does it turn you off from an author’s future work if they’ve blasphemed? Inquiring minds want to know.

Get a glimpse into my short story colletion, Kindred Spirits. Due to be released just in time for Halloween 2013.